“A drop of the heart’s blood of Mother Earth” is how the ruby is described in the Orient. A ruby gemstone is a pink to blood red precious stone that is considered one of the 4 most precious gemstones, along side Emerald, Sapphire and diamonds. The ruby gemstone is the birthstone of the month of July and the most expensive ruby in the world is the Sunrise Ruby.

These are just a few beliefs about the precious red stone:

According to myths, the brightness of the gemstone is said to be created by a flame residing deep inside the stone, which never goes off. his idea leads to the many interesting legends surrounding the stone. If placed into water, it was thought to make it boil. If hidden in a wrapping, it would shine through and show its presence.

In the past, rubies were separated into classes based on their clarity and perfection. Lower class rubies were kept away from the higher classes as it was believed that the lower classes of stones could contaminate and ruin the nicer ones, just as one rotten fruit can spread to all the others.

Myths and legends about rubies was that they could be used to foretell danger by the change of the color of the stone that turns deeper and darker as danger approaches. A loophole in the system was that if the stone was stolen or otherwise not in the hands of its rightful owner, the magic of the stone wouldn’t work and there would be no warning if peril was approaching. 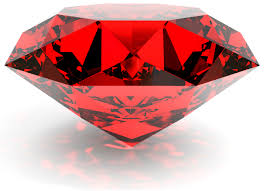 If worn on the left hand, the ruby stone would not only warn of approaching danger it could attract good fortune as well.

Wearing or carrying a ruby is considered to overcome exhaustion and lethargy. It stimulates circulation and amplifies energy and vitality to the whole system. However, it is also considered beneficial for those who are highly sensitive or irritable for it has been known to calm hyperactivity in some individuals.

We at Nikita Jewels, are happy to bring you the best of jewelry that has been encrusted with rubies and are undoubtedly, the best in the market. Visit us at Vashi today to buy yourself the best of the collection!

Here is why Pokémon is inspired from Gemstones

Emerald Birthstone of May: For wisdom, faith and success in love!