Opal became the official birthstone of the month of October in 1912. The National Association of Jewelers came together at that time to finalize the longtime debate as to which gemstones represented each month. Opal has been a clear winner for the month of October since the 15th century.

How to Opals Get Their Color?

Precious opals have two basic colors, their background color and their play of colour. The background color is caused by impurities within the silica. The other colors are caused by the way silica forms together. Silica is composed of a bunch of tiny spheres that adhere to one another. When they fuse, tiny gaps are created between them that allow the light to diffract. This diffraction causes a magnitude of different shapes and color combinations.

Opal is formed from rain. There is some conjecture on how exactly this precious gemstone forms, but many believe it is formed when water from rain seeps down into crevasses in the rock. Once the water evaporates, the silica that is left behind dries out and hardens into precious opal.

Opal has been found on Mars! It is one of only a handful of gemstones that have ever been discovered outside of our planet (the other being Peridot from outer space).

Opallios is the Greek word for Opals meaning To see a change of colour.The Roman word for Opal is Opalus meaning precious stone. The ancient Greeks believed that opals were formed from the tears of joy wept by Zeus when he defeated the titans, and that the opal bestowed prophetic powers.

5) The Queen Of Gemstones

The ancient Romans considered it a symbol of hope and good fortune. A roman scholar in 75AD summed up our beautiful opal saying: “Some opali carry such a play within them that they equal the deepest and richest colors of painters. Others…simulate the flaming fire of burning sulphur and even the bright blaze of burning oil.” He marveled that this kaleidoscopic gem encompassed the red of ruby, the green of emerald, the yellow of topaz, the blue of sapphire, and the purple of amethyst.” This is why Opal is commonly called the Queen of Gemstones.

Not only has opal been in the minds and hearts of mankind for hundreds if not thousands of years, opals take a very long time to form. According to popular theory, silica (which is what opal is made out of) flooded parts of Australia 20 to 30 million years ago. As millions of years passed, this silica solidified between boulders and crevices to form opal. This didn’t happen overnight! It takes roughly 5 million years to solidify 1cm of opal.

Australian native aborigines tell us that opal is our creator’s footprint that touched the earth at the base of a rainbow to bring harmony.

Opal is a Lucky gemstone. Most civilizations see opal as a lucky stone. There have been some exceptions to this including an English writer in the 1800’s and other gemstone marketers who say Opal is bad luck in their marketing. Maybe they realized opal is the best gemstone on earth and had to discredit it!But this campaign has failed and now Opal is even considered a talisman in some countries and a status symbol to own in others.

Queen Victoria’s favorite gemstone was Opal! She had Sapphires, Rubies and Diamonds from all over the British empire but fell in love with the intoxicating colours of Opals.

10) More than Meets The Eye

The play of color you see in Opal is due to millions of tiny silica Spheres of different sizes. These spheres refract light and cause the beautiful spectral colors you see in opal. The spheres have to be just the right size and of a uniform nature to create enough color for our eyes to see.

Invite good fortune with birthstone jewellery which is much in vogue nowdays! 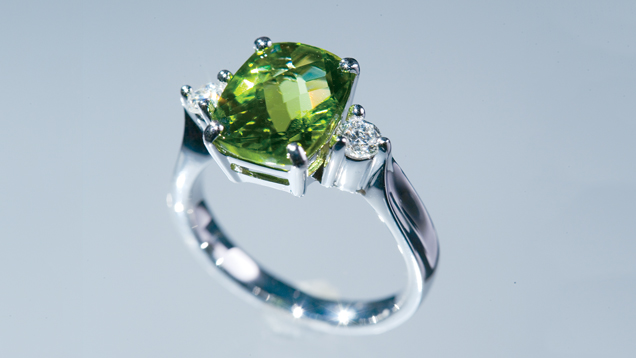 Emerald Birthstone of May: For wisdom, faith and success in love!